The heart of Europe is formed by Poland, Slovakia, Hungary, Romania and Moldova, countries which each have their own, often centuries-old history, which is particularly visible in the beautiful old city. Discover the different cultural and natural highlights of this burgeoning nation.

Join our international groups with active travelers, of all ages. Most will come from Holland and Belgium, but you will find they have an excellent command of English. Your tour leader addresses the group in Dutch and English. Our skilled land crew have worked with Djoser for many years and make sure things run smoothly.

There is ample time for group exploration. Count on lots of walking. But sometimes, it is great to be able to break off and explore on your own. Your guide can make some great suggestions.

Join us for unforgettable cultural, nature and local experiences! 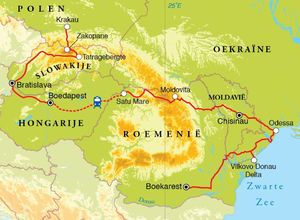 journey begins in the thousand-year-old Krakow, perhaps the most beautiful city in Poland. One of few places that remained intact after World War II is the Wawel Castle towering majestically above the river Wisla. From the beginning of the 17th century this was the place of residence of the Polish kings. Later the city fell into the hands of the Hapsburgs. The town boasts many lush buildings and many architectural styles, such as the impressive ochre-coloured Cloth Hall. From the many terraces you can get a nice impression of the old market, the largest medieval town square in the world.

Medieval gates and city walls encircle a multitude of churches and civil buildings, such as the Town Hall and the ochre-coloured Gothic Market Hall. After years of decline, the former Jewish district of Kazimierz has returned. You can find the old atmosphere back in many restaurants where you will hear Yiddish music. From the movie Schindler’s List, you can visit Schindler's factory. You may recongnize images from the movies Schindler's List and The Pianist in this district.

In Poland, the Birkenau concentration camp is 9.32 miles outside the city. In this area is the 700 year old Wieliczka salt mine more than 328 feet deep. In the halls and chapels you will find statues carved from salt. It is accessible by public transport. A tour on the spot (2 km/2 hours) is required. A full day excursion will take us to the Auschwitz and the former extermination camp Birkenau, both chilling experiences.

From Poland we cross the border and continue on to Slovakia. Rhis lesser-known independent country secceded from the Czech Republic in January 1993. It has an extensive cultural heritage and offers an abundcance of natural beauty with vast, peaceful areas. On the flanks of the Carpathians you can hike in rugged forests. Nearby you will see beautiful karst mountains. Along the many mountain villages, a local train runs to and from the various mountain villages. We will stay the night below, in the Strbeske Pleso.

In the North of Slovakia, in Romania, we visit lovely towns and farming villages such as Levoca, Kezmarok and Vlkolinec. Levoca is one of the most impressive historic towns in Slovakia; the old, walled, medieval centre is well preserved with pastel-colored cottages. In the Gothic church you can admire a monumental Gothic altar. Kezmarok appers to be more modest, but is also very attractive. When time permits we can also stop at the monumental Castle of Spissky Podhradie. Then on to the village Vlkolinec, which, due to its isolated location, has remained mostly in its original state. It is on the list of Unesco World Heritage site because of a 45-many trunk houses, traditional for this region.

Via Trencin we drive to the Slovak capital Bratislava on the Danube River located just 37 miles from Vienna. From the castle looks out over this typical Middle-European city, with its cozy central square and stately, pastel-coloured buildings built in the Habsburg period. We have most of the day to explore this beautiful city.

The following morning, if traffic permits, we drive for an hour or three, to the Hungarian capital, Budapest. The most beautiful parts of Budapest will be around Matyaskerk. In the streets you can find nice shops and terraces. From the fishermen's bastion you have a magnificent view over the Danube and on the Pest side, the Parliament building casts a reflection in the river. The metro will take you quickly and comfortably to the various places of interest in this area, some of which are within walking distance of each other. After a ride with the oldest metro line of the continent, you can proceed to the Heroes square, which is adorned with images of Hungarian national heroes like the founder, Arpad, to the pleasant shopping in this modern metropolis.

On the stylish 19th century café Gerbeaud at Vörösmarty square annex lunch room you can relax on a terrace to take in the special atmosphere. The pastry is of high standing, also regarding the price. Budapest is also long been famous for its hot springs. There are several in the city. Budapest holds the title "City of Spas" since the year 1934, as it has more thermal and medicinal water springs than any other capital city in the world. A visit to such a bath with hot mineral spring water will relax you for the rest of the trip. The Danube is beautifully illuminated at night and makes for a nice walk or boat trip.

After three nights in Budapest we leave the Hungarian capital to go to the next country: Romania. We travel by train from Budapest to Satu Mare. Via Debrecen we reach the border with Romania and we go to the region of Maramures in the North. We spend the night in Satu Mare on the Romanian border, a quiet town with some nice Art Nouveau buildings in the Central Piata Libertatii. In the North of Romania traditions are still alive and many villages many historic wooden houses and churches still exist. In many villages along the way, you see how the houses on the street are enclosed by gates with fine carvings.

In the village of Sapanta, close to the border with Ukraine, is a remarkable cemetery. The graves are enlivened with colourful paintings and comic poems, which usually relate to the deceased. This was actually a hobby of the cemetery keeper, which was continued by others after his death. Through the Valley of the Iza River, where the traditions of the region of Maramures are still alive, and at the 4590 foot high Prislop pass, we reach the region of Bukovina in the Romanian province of Moldavia.

From the village of Moldovita, or the larger place Suceava, we visit the monasteries of Bukovina for which the region is well know. They were built in the 15th and 16th century and provided protection against invading armies. The fortified churches are painted inside and out with colourful biblical scenes intended as stories to educate the illiterate population. The last judgement scene is especially visual and gorey. We visit, depending on the time, three or four monasteries, including Voronet, whose chapel from 1488, is called the “Sistine Chapel of the East” .

we travel to the least known of the visiting countries: Moldova. Orheiul Vechi and Transnistria Moldova Iasi are the student cities. Few people know that there is a lot of wine produced in Moldova. From the capital, Chisinau, is it possible to take a fun wine tour in the area. Chişinău is a pleasant, green city that suffered greatly in the Second World War.

An excursion to the 13th century Orheiul Vechi monastery, excavated by Orthodox monks, is interesting. You can see the various cells for hermits. Before that it was, a fortress, due to its ideal location. It was inhabited until the 18th century cave monastery and is now currently used by some monks. The nearby traditional village of Sauteurs is well worth a walk.

Next we are in the area may be a trip to the Republic of Transnistria, which declared itself independent. The country is however not recognized by any other country in the world and is officially still considered to be part of Moldova. There are Russian Blue Helmets from the peace corps stationed to keep an eye out and to keep Moldova in the line. Special permission is therefore required to visit here. The capital, Tiraspol, is also called the largest Soviet open air museum in the region. Huge Soviet style buildings, large squares, and Soviet symbols adorn the streets. We can visit the Kvint distillery where the famous cognac is sold; a national symbol.

From Chisinau we travel to the Danube Delta Biosphere Reserve, one of the largest wetlands of Europe, located in the delta of the Danube. En route you'll pass small farming villages.

The ending point of the journey is the Romanian capital, Bucharest. Overall, Bucharest is a modern city. Wide tree-lined boulevards with stately homes adorn the city, according to some, reminicient of Paris. The medieval Center still has remnants of a medieval Royal Palace, Curtea Veche. This part is surrounded by vast areas from the 19th century, when Bucharest became the capital of the newly created Romania.

In the South you will find the giant Palace that Ceausescu constructed as housing of the party and state officials. There is an old quarter, a stadium, several monasteries and churches. Since 1994 is the seat of the Romanian Parliament has been located in this building, which is among the largest of the world can count with a total area of about 6500 square feet.

In the North of Bucharest you'll find great lakes and parks, with an interesting open-air museum with homes from all parts of the country. Today, the atmosphere on the wide pedestrian boulevard and in the green areas is very cozy. Those who seek a bit of relaxation can visit the beautiful parks and lakes in and around Bucharest, before you fly home.

If you request a roommate  but we are unable to match you, you will not be charged the additional amount for the single room.

Estimated out of pocket expenses weekly per person: $250

Inquire about room extensions at the beginning or end of your trip.

When you schedule your flights, you will need to coordinate your flights to arrive before or at the same time as the Dutch participants so that you will not miss any portion of the program.

International participants of all ages (Most from the Netherlands and Belgium)

Are you ready to book a trip?

* Submit this form to begin your reservation process.  Confirm that names exactly as they appear on a current passports.  If names on your international, domestic flights or visas (if applicable) do not match your name as it appears on your passport, some countries will deny you entry.

TIP:  Also verify your name on your flight records, within 24 hours after reserving to avoid change or cancellation penalties.

* Call us with your charge card information.  Your place will be reserved upon receipt of funds for required deposit.